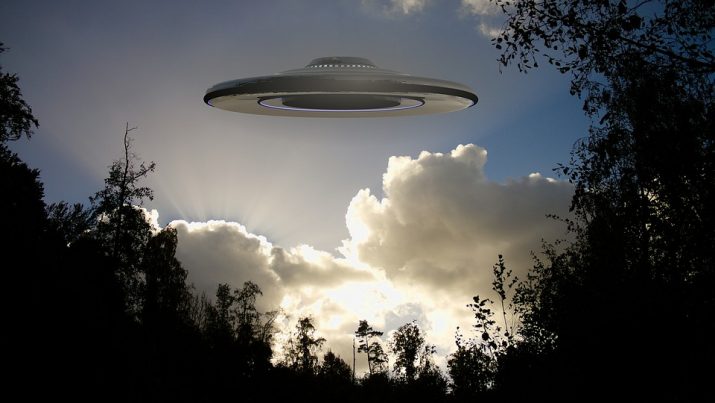 We tend to think of UFOs and possible extraterrestrial visitations as a fairly recent phenomenon, beginning around the end of WWII when a wave of UFO sightings and occurrences such as the Roswell incident began to capture the imagination of the public.

But UFO sightings are nothing new. Throughout history, there have been accounts of mysterious flying crafts piloted by otherworldly beings – descriptions that sound very much like modern UFO sightings and reported encounters with alien beings.

Over the centuries, there have also been artistic depictions of what appear to be spacecraft – from the familiar “flying saucer” UFO shapes to winged craft that look more like modern fighter jets or the space shuttle – found in paintings, drawings and even prehistoric cave paintings and rock art from various cultures throughout the world.

There are also numerous examples of what appear to be alien beings depicted in artwork from prehistoric through modern times.

One of the oldest examples of prehistoric alien and UFO related cave art was recently discovered in Chhattisgarh, India. The rock paintings found there are 10,000 years old, according to archaeologists, and the figures and “craft” depicted in them strongly resemble modern Hollywood depictions of extraterrestrials.

According to archaeologist JR Bhagat:

“The paintings are done in natural colours that have hardly faded despite the years. The strangely carved figures are seen holding weapon-like objects and do not have clear features. The nose and mouth are missing, and in a few pictures they are even shown wearing spacesuits…

“There are several beliefs among locals in these villages. While few worship the paintings, others narrate stories they have heard from ancestors about ‘rohela people’ – the small sized ones – who used to land from the sky in a round shaped flying object and take away one or two persons in the  village who never returned.”

The prehistoric Chhattisgarh cave paintings also include depictions of what could be interpreted as spacecraft – round- or saucer-shaped objects supported by tripods. “The fan-like antenna and three legs of vehicle’s stand clearly show a similarity to UFO type craft,” said Bhagat.

The Chhattisgarh state department of archaeology and culture have requested the assistance of NASA and the Indian Space Research Organization (ISRO) in studying the paintings in detail. “Chhattisgarh presently doesn’t have any such expert who could give clarity on the subject,” according to Bhagat.

India’s long history contains many references that are remarkably similar to our modern conception of aliens and UFOs. Ancient Indian texts include detailed accounts of flying crafts called vimanas, which were capable of traversing the solar system and the stars.

One text described the vimana as “a chariot that resembles the sun…going everywhere at will, resembling a bright cloud in the sky.”

Another relates an account of a craft “powered by winged lighting…a ship that soared into the air, flying to both the solar and stellar regions.”

Of course, there are numerous references in the bible and other religious and historical texts that have been interpreted as descriptions of UFOs or human interactions with alien beings. It’s difficult to think of a culture that doesn’t have historical references to mysterious flying crafts and otherworldly beings.

Modern astronomers may be on the brink of confirming that life does indeed exist elsewhere – within our solar system and beyond. Powerful new telescopes and unmanned space probes are beginning to unlock the secrets of the cosmos and we may very well uncover proof of alien life within the very near future.

But the past also contains clues about extraterrestrial life and the possibility that we may have been visited – perhaps many times – by intelligent beings from other parts of this vast universe.

The discovery of the cave paintings in Chhattisgarh may provide another valuable piece of the puzzle.