NASA astronaut thinks aliens haven’t visited Earth because we don’t have a cancer cure yet… huh? 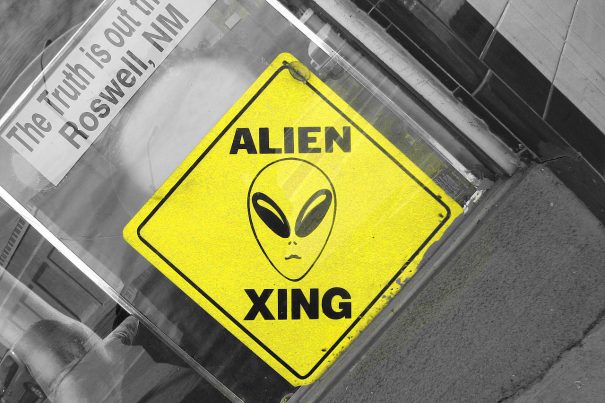 Just days after Apollo 12 launched on November 14, 1969, astronauts Charles “Pete” Conrad and Alan Bean hovered out of the spaceship and onto the surface of the moon. They were the third and fourth astronauts, respectively, to step foot on the moon’s dusty gray surface. Their mission was to gather seismic, scientific, and engineering data on the moon.

Former Navy pilot and commander of Apollo 12, Charles Conrad, passed away suddenly in a 1999 motorcycle accident. Former Navy captain and lunar module pilot, Alan Bean, is still living at age 85. He resigned from NASA in 1981 and is now an artist who paints prized portraits of lunar environments. “Even if I lived to 185 years old I wouldn’t run out of ideas of things to paint on this topic,” he said. He paints seven days a week and his artwork sells for hundreds of thousands of dollars apiece.

Former NASA astronaut talks about the possibility of alien life

Alan Bean has spent 1,671 hours in space, so his paintings are like eye-witness accounts for what’s really out there. In an interview at his home in Houston, Texas, Alan Bean gave an interview and spoke of many things. Aside from his love of art and painting, he began to open up about the possibility of alien life and reasons why extraterrestrials wouldn’t visit a place like Earth, at least for now.

“One of [the] reasons I don’t believe they have been here is that civilisations that are more advanced are more altruistic and friendly — like Earth, which is better than it used to be — so they would have landed and said ‘we come in peace and we know from our studies you have cancer that kills people, we solved that problem 50 years ago, here’s the gadget we put on a person’s chest that will cure it, we will show you how to make it.’”

He believes that someday, many years from now, humans will be able to travel to other planets and teach other civilizations how to cure cancer.

Hopefully he is right, that one day the causes of cancer will be taken seriously and eradicated from the Earth. Hopefully one day the knowledge of cellular energy utilization and real nutrition-based cancer cure protocol will no longer be suppressed.

Cancer certainly isn’t random. Cancer is a cellular issue, the result of a nutritionally-starved, oxygen starved, toxic cellular environment. Eradication of cancer can only take place on an individual basis, with therapeutic nutrition and detoxification protocols applied to a person’s unique situation. There is no magic pill that can eradicate cancer. There will be no futuristic, universal vest to put on, as Mr. Bean implies. The healing intelligence already exists within the body and must be activated at the cellular level. Maximizing the energy of the mitochondria is essential. Medical genius Dr. Max Gerson was a pioneer for reversing terminal illness. To this day, Gerson’s natural healing protocols and advancements made in nutritional science since his time have faced opposition from powerful industries. There are many powerful industries that profit off people not knowing the truth.

So maybe Mr. Bean is right. Maybe a kinder, more compassionate extra-terrestrial race wouldn’t want to visit Earth at this time. Maybe it’s not because of cancer itself, but because there are industries that prey on cancer diagnostics and treatments that only exacerbate health problems. Perhaps only another life form from another planet could save humans from themselves. How long must life-saving information on cancer be suppressed?